This summary is a mythological account, based on literary details from the MahÄbhÄrata, the Harivamsa, the Bhagavata Purana and the Vishnu Purana. The scenes from the narrative are set in ancient India mostly in the present states of Uttar Pradesh, Bihar, Rajasthan, Haryana, Delhi and Gujarat. The legends about Krishna's life are called Krishna charitas (IAST: Ká¹›á¹£á¹‡acaritas).

Krishna was born to Devaki and her husband, Vasudeva of the Yadava clan. Devaki's brother was a tyrant named Kansa. At Devaki's wedding, according to Puranic legends, Kansa was told by fortune tellers that a child of Devaki would kill him. Kansa arranged to kill all of Devaki's children. When Krishna was born, Vasudeva secretly carried the infant Krishna away across the Yamuna and exchanged him. When Kansa appeared to kill the new born, the exchanged baby appeared as Durga, warning him that his death had arrived in his kingdom and then disappeared, according to the legends in the Puranas. Krishna grew up with Nanda and his wife Yasoda near modern day Mathura.Â Two of Krishna's siblings also survived, namely Balarama and Subhadra, according to these legends.

The legends of Krishna's childhood and youth describe him as a cow herder, his mischievous pranks such as a Makhan Chor (butter thief), and his role as a protector who stole the hearts of the people in both Gokul and Vrindavana. Krishna, for example, lifted the Govardhana hill to protect the native people of Vrindavana from devastating rains and floods.

Other legends describe him as an enchanter and playful lover of the gopis (milkmaids) of Vrindavana, especially Radha. These stories are known as the Rasa lila and were romanticised in the poetry of Jayadeva, author of the Gita Govinda. These became important as part of the development of the Krishna bhakti traditions worshiping Radha Krishna.

Krishna's childhood reinforces the Hindu concept of lila, playing for fun and enjoyment and not for sport or gain. His interaction with the gopis at the rasa dance or Rasa-lila is an example. Krishna played his flute and the gopis came immediately from whatever they were doing, to the banks of the Yamuna River, and joined him in singing and dancing. Even those who could not physically be there joined him through meditation.

This lila is a constant theme in the legends of Krishna's youth. Even when he is battling with a serpent to protect others, he is described in Hindu texts as if he is playing a game.Â This playfulness of Krishna is celebrated as Rasa-lila and Janmashtami, where Hindus in some regions such as Maharashtra make human gymnastic pyramids to break open handis (clay pots) hung high in the air that spill buttermilk all over the group after being broken by the person at the top.

Krishna legends then describe his return to Mathura. He overthrows and kills the tyrant king and uncle Kansa, after quelling several assassination attempts from Kansa. He reinstated Kansa's father, Ugrasena, as the king of the Yadavas and becomes a leading prince at the court.Â During this period, he becomes a friend of Arjuna and the other Pandava princes of the Kuru kingdom. Krishna plays a key role in the Mahabharata. After the war is over, he leads his Yadava subjects to the city of Dwaraka (in modern Gujarat).

According to the epic Mahabharata, Krishna became the charioteer of Arjuna for the Kurukshetra war, but on the condition that he personally would not raise any weapon. Upon arrival at the battlefield, and seeing that the enemies are his family, his grandfather, his cousins and loved ones, Arjuna is moved and says his heart does not allow him to fight and kill others. He would rather prefer to renounce the kingdom and put down his Gandiv (Arjuna's bow). Krishna then advises him about the nature of life, ethics and moralities when one is faced with a war between good and evil, impermanence of matter, permanence of the soul and the good, duties and responsibilities, the nature of true peace and bliss, different types of yoga to reach this state of bliss and inner liberation. This conversation between Krishna and Arjuna is presented as a discourse called the Bhagavad Gita.

The tenth and eleventh book of the Bhagavata Purana is a poetic masterpiece, full of imagination and metaphors, with no relation to the realism of pastoral life found in the Harivamsa. Krishna life is presented as a cosmic play (lila), where his youth is set as a princely life with his foster-father Nanda portrayed as a king.Â Krishna's life is closer to that of a human being in Harivamsa, but it is a symbolic universe in the Bhagavata Purana where Krishna is within the universe, beyond it, as well as the universe itself, always.Â The Bhagavata Purana manuscripts to exist in many versions, in numerous Indian languages.

The legendary Kurukshetra war is stated in the Indian texts to have led to the death of all the hundred sons of Gandhari. On the night before Duryodhana's death, Krishna visited Gandhari to offer his condolences. Gandhari felt that Krishna knowingly did not put an end to the war, and in a fit of rage and sorrow, Gandhari cursed Krishna along with everyone else from his Yadu dynasty would perish. According to the Mahabharata, an internecine fight broke out between the Yadavas at a festival, who killed each other. A hunter named Jara mistakes sleeping Krishna to be a deer shoots an arrow which fatally injures him. Krishna forgives Jara and dies.Â The pilgrimage (tirtha) site of Bhalka in Gujarat marks this location where Krishna is believed to have died. It is also known as Dehotsarga, states Diana L. Eck, a term that literally means where Krishna "gave up his body".

There are numerous versions of Krishna's life stories, of which three sources are most studied: the Harivamsa, the Bhagavata Purana, and the Vishnu Purana.Â These share the basic storyline but vary significantly in their specifics, details, and styles.Â The Harivamsa is the most original composition, set in realism style that describes Krishna's life as a poor herder but weaves on poetic and allusive fantasy. It ends on a triumphal note, not the death of Krishna.Â The fifth book of the Vishnu Purana moves away from Harivamsa realism, differs in details, embeds in Krishna in mystical terms and eulogies.Â The Vishnu Purana manuscripts exist in many versions. 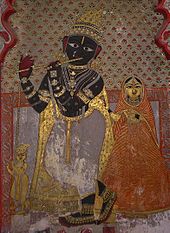 The date of Krishna's birth is celebrated every year as Janmashtami.Â According to mythologies in the Jain tradition, Krishna was a cousin of Neminatha, the 22nd Tirthankara of the Jains.Â Neminatha is believed in the Jain tradition to have been born 84,000 years before the 9th-century BCE Parshvanatha.Â Several Indian sources place Krishna as an actual historic person and to a much later period, about 3100 BCE, and this is based on interpreting the events and circumstances described in the Puranas.

Other scholars state that the Puranas are not a reliable source for dating Krishna or of Indian history, because the content therein about kings, history of various people, sages and kingdoms are highly inconsistent across the manuscripts, likely based in part on real events, in part hagiography, and in part expansive imagination or fabrication.Â A high degree of inconsistency and manuscript corruption occurred particularly from the 12th century onwards, evidenced by cross-referencing across the texts; Matsya Purana, for example, stated that Kurma Purana has 18,000 verses, while Agni Purana asserts the same text has 8,000 verses, and Naradiya attests that Kurma manuscript has 17,000 verses.Â The Puranic literature has gone through slow reduction and text corruption over time, as well as sudden deletion of numerous chapters and its replacement with new content to an extent that the currently circulating Puranas are entirely different than those that existed before the 11th century, or 16th century.Â For example, a newly discovered palm-leaf manuscript in Nepal has been dated to be from 810 CE but is entirely different than versions of the same Purana text that has been circulating in South Asia since the colonial era.