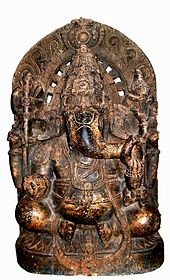 Ganesha is a popular figure in Indian art.Â Unlike those of some deities, representations of Ganesha show wide variations and distinct patterns changing over time.Â He may be portrayed standing, dancing, heroically taking action against demons, playing with his family as a boy, sitting down or on an elevated seat, or engaging in a range of contemporary situations.

Ganesha images were prevalent in many parts of India by the 6th century.Â The 13th-century statue pictured is typical of Ganesha statuary from 900â€“1200, after Ganesha had been well-established as an independent deity with his own sect. This example features some of Ganesha's common iconographic elements. A virtually identical statue has been dated between 973â€“1200 by Paul Martin-Dubost,Â and another similar statue is dated c. 12th century by Pratapaditya Pal.Â Ganesha has the head of an elephant and a big belly. This statue has four arms, which is common in depictions of Ganesha. He holds his own broken tusk in his lower-right hand and holds a delicacy, which he samples with his trunk, in his lower-left hand. The motif of Ganesha turning his trunk sharply to his left to taste a sweet in his lower-left hand is a particularly archaic feature.Â A more primitive statue in one of the Ellora Caves with this general form has been dated to the 7th century.Â Details of the other hands are difficult to make out on the statue shown. In the standard configuration, Ganesha typically holds an axe or a goad in one upper arm and a pasha (noose) in the other upper arm. In rare instances, he may be depicted with a human head.

The influence of this old constellation of iconographic elements can still be seen in contemporary representations of Ganesha. In one modern form, the only variation from these old elements is that the lower-right hand does not hold the broken tusk but is turned towards the viewer in a gesture of protection or fearlessness (abhaya mudra).Â The same combination of four arms and attributes occurs in statues of Ganesha dancing, which is a very popular theme.

Ganesha has been represented with the head of an elephant since the early stages of his appearance in Indian art.Â Puranic myths provide many explanations for how he got his elephant head.Â One of his popular forms, Heramba-Ganapati, has five elephant heads, and other less-common variations in the number of heads are known.Â While some texts say that Ganesha was born with an elephant head, he acquires the head later in most stories.The most recurrent motif in these stories is that Ganesha was created by Parvati using clay to protect her and Shiva beheaded him when Ganesha came between Shiva and Parvati. Shiva then replaced Ganesha's original head with that of an elephant.Â Details of the battle and where the replacement head came from varying from source to source.Â Another story says that Ganesha was created directly by Shiva's laughter. Because Shiva considered Ganesha too alluring, he gave him the head of an elephant and a protruding belly.

Ganesha's earliest name was Ekadanta (One Tusked), referring to his single whole tusk, the other being broken.Â Some of the earliest images of Ganesha show him holding his broken tusk.Â The importance of this distinctive feature is reflected in the Mudgala Purana, which states that the name of Ganesha's second incarnation is Ekadanta. Ganesha's protruding belly appears as a distinctive attribute in his earliest statuary, which dates to the Gupta period (4th to 6th centuries).Â This feature is so important that, according to the Mudgala Purana, two different incarnations of Ganesha use names based on it: Lambodara (Pot Belly, or, literally, Hanging Belly) and Mahodara (Great Belly).Â Both names are Sanskrit compounds describing his belly (IAST: udara).Â The Brahmanda Purana says that Ganesha has the name Lambodara because all the universes (i.e., cosmic eggs; IAST: brahmÄá¹‡á¸as) of the past, present, and future are present in him.Â The number of Ganesha's arms varies; his best-known forms have between two and sixteen arms.Â Many depictions of Ganesha feature four arms, which is mentioned in Puranic sources and codified as a standard form in some iconographic texts.Â His earliest images had two arms.Â Forms with 14 and 20 arms appeared in Central India during the 9th and the 10th centuries.Â The serpent is a common feature in Ganesha iconography and appears in many forms.Â According to the Ganesha Purana, Ganesha wrapped the serpent Vasuki around his neck.Â Other depictions of snakes include use as a sacred thread (IAST: yajÃ±yopavÄ«ta) wrapped around the stomach as a belt, held in a hand, coiled at the ankles, or as a throne. Upon Ganesha's forehead may be a third eye or the sectarian mark (IAST: tilaka), which consists of three horizontal lines.Â The Ganesha Purana prescribes a tilaka mark as well as a crescent moon on the forehead.Â A distinct form of Ganesha called Bhalachandra (IAST: bhÄlacandra; "Moon on the Forehead") includes that iconographic element.Â Ganesha is often described as red in color.Â Specific colors are associated with certain forms.Â Many examples of color associations with specific meditation forms are prescribed in the Sritattvanidhi, a treatise on Hindu iconography. For example, white is associated with his representations as Heramba-Ganapati and Rina-Mochana-Ganapati (Ganapati Who Releases from Bondage).Â Ekadanta-Ganapati is visualized as blue during meditation in that form. 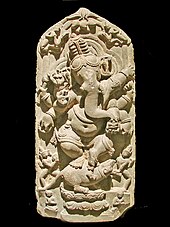 Ganesha is often shown riding on or attended by a mouse, shrew or rat.Â Martin-Dubost says that the rat began to appear as the principal vehicle in sculptures of Ganesha in central and western India during the 7th century; the rat was always placed close to his feet.Â The mouse as a mount first appears in written sources in the Matsya Purana and later in the Brahmananda Purana and Ganesha Purana, where Ganesha uses it as his vehicle in his last incarnation.Â The Ganapati Atharvashirsa includes a meditation verse on Ganesha that describes the mouse appearing on his flag.Â The names MÅ«á¹£akavÄhana (mouse-mount) and Ä€khuketana (rat-banner) appear in the Ganesha Sahasranama.

The mouse is interpreted in several ways. According to Grimes, "Many, if not most of those who interpret Gaá¹‡apati's mouse, do so negatively; it symbolizes tamoguá¹‡a as well as desire".Â Along these lines, Michael Wilcockson says it symbolizes those who wish to overcome desires and be less selfish.Â Krishan notes that the rat is destructive and a menace to crops. The Sanskrit word mÅ«á¹£aka (mouse) is derived from the root mÅ«á¹£ (stealing, robbing). It was essential to subdue the rat as a destructive pest, a type of vighna (impediment) that needed to be overcome. According to this theory, showing Ganesha as master of the rat demonstrates his function as Vigneshvara (Lord of Obstacles) and gives evidence of his possible role as a folk grÄma-devatÄ (village deity) who later rose to greater prominence.Â Martin-Dubost notes a view that the rat is a symbol suggesting that Ganesha, like the rat, penetrates even the most secret places.