Homeopathy is a system of alternative medicine created in 1796 by Samuel Hahnemann, based on his doctrine of like cures like (similia similibus curentur), a claim that a substance that causes the symptoms of a disease in healthy people would cure similar symptoms in sick people. Homeopathy is a pseudoscience â€“ a belief that is incorrectly presented as scientific. Homeopathic preparations are not effective for treating any condition;Â large-scale studies have found homeopathy to be no more effective than a placebo, suggesting that any positive effects that follow treatment are only due to the placebo effect and normal recovery from illness. 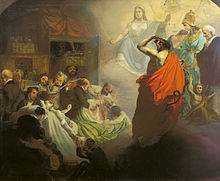 Homeopaths claim that Hippocrates may have originated homeopathy around 400 BC, when he prescribed a small dose of mandrake root to treat mania, knowing it produces mania in much larger doses.Â In the 16th century, the pioneer of pharmacology Paracelsus declared that small doses of "what makes a man ill also cures him".Â Samuel Hahnemann (1755â€“1843) gave homeopathy its name and expanded its principles in the late 18th century.

There are no upcoming events at this time.